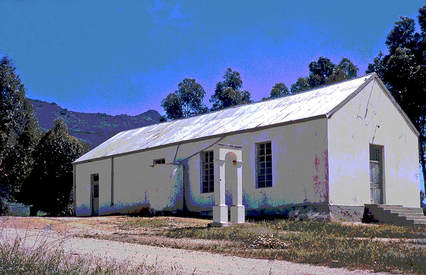 Click to download a PDF of A Short History of the Riebeek Valley
M c G r e g o r
Founded in 1861 and initially named Lady Grey, it assumed its present title in 1903, after the Rev Andrew McDonald who was based in Robertson for many years. Today it retains much well maintained evidence of its Victorian beginnings, and is one of the few villages where many of the modern additions appear to be an organic growth from its roots.

Beginning as a trading centre, the farm The Willows became Willow-Moore, and subsequently Willowmore in 1864 when land was donated to the Dutch Reformed Church. It was officially established as a town a decade later.

Situated in the Langkloof (Eastern Cape) this haphazardly laid out village owes its legacy to a lack of town planning - it appears to have developed organically - which so much enhances its appeal. It does suffer a certain lack of maintenance with some structures in the main street in ruins, and what was the school plundered and now boarded up, hopefully to retain any further destruction. Many of the buildings were constructed with stone, creating a sense of unity. The Belfry Kitchen fronts a unique institution, considering its remoteness, that of the South African Institute for Conservation. http://www.sainst.org

P i k e t b e r g
Sometimes characteristics of structures are what lead the eye – on the left a building with two heavy, dominating extended bays, overshadowing the central gap, which contains two entrances. The central photograph depicts unusual chamfered corners, each with its own apex. The row on the right are a complex mix of styles, from Karoo vernacular (with something of a double-storey Georgian scale) to apparently later added stoop and extension.

The magnificently situated old gaol (now the museum) at the head of the main street, where one would have expected the church to be. Just around the corner in Park Street is superbly proportioned building, with two extending wings to the front, assumed to be added after the original construction.