Cemeteries and graveyards hold an intense fascination for me – they tell stories and episodes of lives past. They exist everywhere from crowded cities to remote, isolated locations.
Sadly they are mostly forgotten places; once the ceremony of the burial is past, few seem to care and take the time to contemplate the deceased.
Even worse is the wanton destruction being performed on these memorials to the dead. In one particular case I reported a vandalised graveyard to a local municipality. Their response was that they only took care of the pathways, the graves were private property and up to the owners to maintain.
So, not policed nor looked after, we can probably expect these sites to further deteriorate.

There are two graves of British soldiers in the grounds of the Church of the Good Shepherd in Klaarstroom, one being that of Lance Corporal J Boyd of the Imperial Yeomanry Corps. After  a skirmish with a Boer commando, Boyd, seriously wounded, took shelter in a ravine. As a Boer soldier, Johannes Klue, rode past he startled Boyd, who shot him. A nearby farmer heard the noise and went to investigate. Finding the fatally wounded Klue he took him back to his house where he later died. Deciding to bury Klue in the kloof he returned and came across the body of Lance Corporal Boyd. He buried both men side by side. Enemies united in death.
Boyd was later reinterred in the church graveyard at the request of his mother.

Between the church and graveyard in Saron is a small morgue, somewhat conveniently situated. The cemetery is a Provincial Heritage Site, but its state causes one to reflect on the merits of this status.

The very evocative graveyard at the Moffat Mission Station in Kuruman. A memorial stone to the daughter of Robert and Mary Moffat (centre) who died of smallpox at the age of 10 months, January 1832, is placed here. Robert founded the station for the London Missionary Society in 1821.

The stone on the left serves as an example of the images conjured up by the narratives on gravestones. This one conveys a feeling of sadness:
Emilie Bennet, the beloved wife of Lawrence Stephan, born 19th January 1850 at Devonshire England. Died 2nd November 1880 at St Helena Bay, Cape of Good Hope and of John Charles Frederick, their son, born 28th October 1880, died 17th January 1881.
We can conclude that this woman made what was then a substantial expedition from her country of birth, only to die in this remote place before her 31st birthday. Were there complications from childbirth, as her son was only some days old when she passed away? Then the child too died before he was three months old. It depicts the sometimes perilous journey of life.

Two lonely places of memory and rest in the northern reaches of the Swartland. Slowly deteriorating, they evoke the concept of ’dust to dust’. 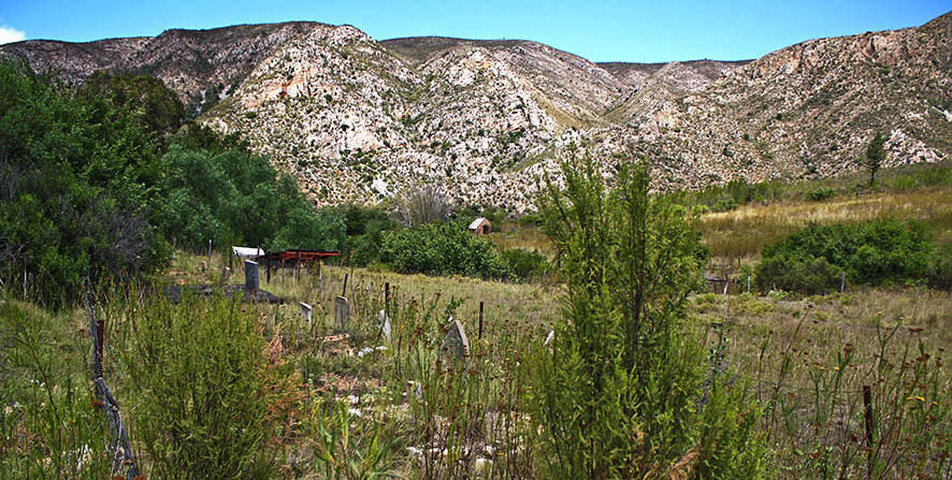 The Hoeree Valley in the Eastern Cape lies to the south and parallel to the Baviaanskloof. Essentially cut off when it was more fully occupied, it is interesting to note that creative flourishes appear on the gravestones. Similar techniques and motifs are to be seen on some of the structures.

Despite its isolated situation, the graveyard at Matjiesrivier is well tended to.

Positioned in the Biedouw Valley on the road to Wupperthal, at the intersection of the way to the Tankwa Karoo.

Obviously the graves of a poorer community, this neglected graveyard at Hopefield is now divided by the R45 between Malmesbury and the west coast. One stone commemorating a certain Witbooi (1882-1918) is still prominent. What was this person's life like? He/she lived through the Anglo Boer conflict and World War 1 - did it have any impact on their life?
Powered by